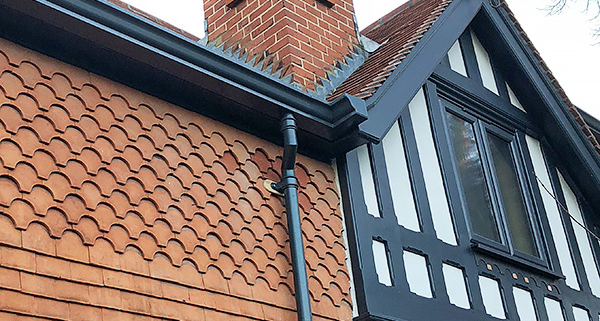 A mock Tudor property has been fitted with Guttercrest’s aluminium rainwater products as part of a scheme of renovation done entirely by the property owner.

A suite of products in the colour RAL 7010, tarpaulin grey were fitted. “The colour is very close to the Farrow & Ball colour ‘Railings’ which was used on the woodwork,” said homeowner and DIYer Shaun Mirams.

“The house is a monument to DIY,” continued Mirams, “I did the whole house myself with some help from the kids, and it’s also been an excuse to buy loads of cool tools!”

The products used by Sean include aluminium fascia, soffit, Moulded Ogee guttering and Traditional Round Downpipe.

Fascia has been fitted behind the gutter to the building’s eaves to provide a decorative waterproofing. The Moulded Ogee gutters, sometimes referred to as ‘Type 46’ are inspired by nineteenth century cast iron gutters, providing the traditional look, but giving all of the benefits of aluminium, including being lightweight, environmentally friendly and easy to install and maintain.

Continuing with the heritage theme, 75mm traditional round downpipe has been installed alongside the gutters. Complete with authentic styled collars inspired by the designs of the nineteenth century drainpipes, these look fabulous on listed and period properties or new builds giving a true cast effect downpipe.

The property has been finished with Guttercrest’s aluminium fascia and soffit which has been fitted around the eaves of the building.

“I’m very pleased with the outcome, it complements the building beautifully and brings in tradition as architectural detail rather than pure function. It was undeniably the right choice over the cheaper alternatives. It was easy enough to fit on my own too and I got the whole house done over two weekends. The only problem was I over-estimated as I’ve never done this before – I have a pile of bits and pipes left over, so I’m going to give the treehouse some guttering!” 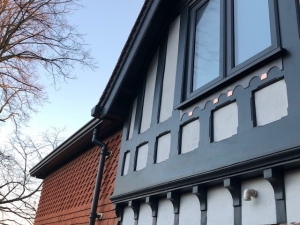 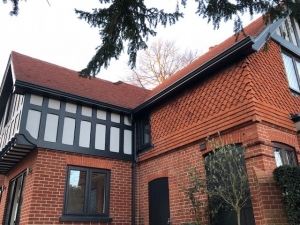 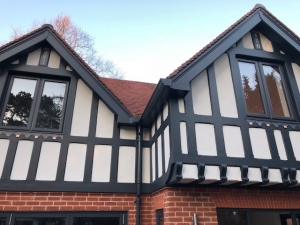 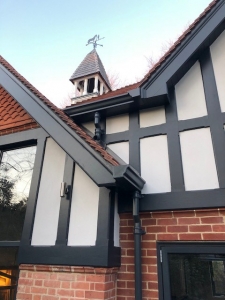 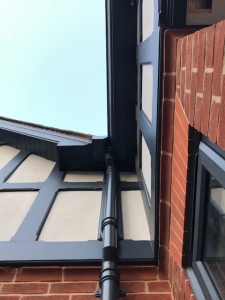 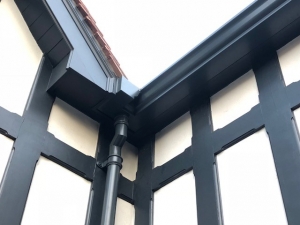 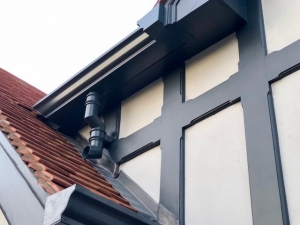 This site uses cookies. By continuing to browse the site, you are agreeing to our use of cookies.

We may request cookies to be set on your device. We use cookies to let us know when you visit our websites, how you interact with us, to enrich your user experience, and to customize your relationship with our website.

Click on the different category headings to find out more. You can also change some of your preferences. Note that blocking some types of cookies may impact your experience on our websites and the services we are able to offer.

These cookies are strictly necessary to provide you with services available through our website and to use some of its features.

Because these cookies are strictly necessary to deliver the website, you cannot refuse them without impacting how our site functions. You can block or delete them by changing your browser settings and force blocking all cookies on this website.

These cookies collect information that is used either in aggregate form to help us understand how our website is being used or how effective our marketing campaigns are, or to help us customize our website and application for you in order to enhance your experience.

If you do not want that we track your visist to our site you can disable tracking in your browser here:

We also use different external services like Google Webfonts, Google Maps and external Video providers. Since these providers may collect personal data like your IP address we allow you to block them here. Please be aware that this might heavily reduce the functionality and appearance of our site. Changes will take effect once you reload the page.

PLEASE NOTE: Some of the colours shown will be available at our standard prices. Others may incur additional cost. We will confirm this with you before you place your order.